Proceedings of the National Academy of Sciences of the United States of America, September 16, 2019

This interesting and detailed paper describes a "proof of concept" reactor that could lead to "zero carbon cement". The reactor produces calcium hydroxide from calcium carbonate by an electrochemical process that also generates hydrogen and a mixture of oxygen and carbon dioxide.

Time-lapse video of the decarbonation cell containing pH indicator dye. Initially, the solution is slightly acidic (pH 6, as indicated by the yellow color) then the solution becomes more acidic (red) near the anode and more alkaline (blue) near the cathode. Image sequence by Felice Frankel.

For "zero carbon cement" the carbon dioxide would need to be captured and stored, or used in some other process.

Alite was synthesized by heating calcium hydroxide from the reactor with fine silica. The alite was of the T1 polymorph since there were almost no impurities to stabilize higher temperature forms of alite.

The paper suggests that the process could produce CO2-neutral cement by using electricity from renewable sources and the hydrogen from the reaction to heat the calcium hydroxide with silica to produce alite. 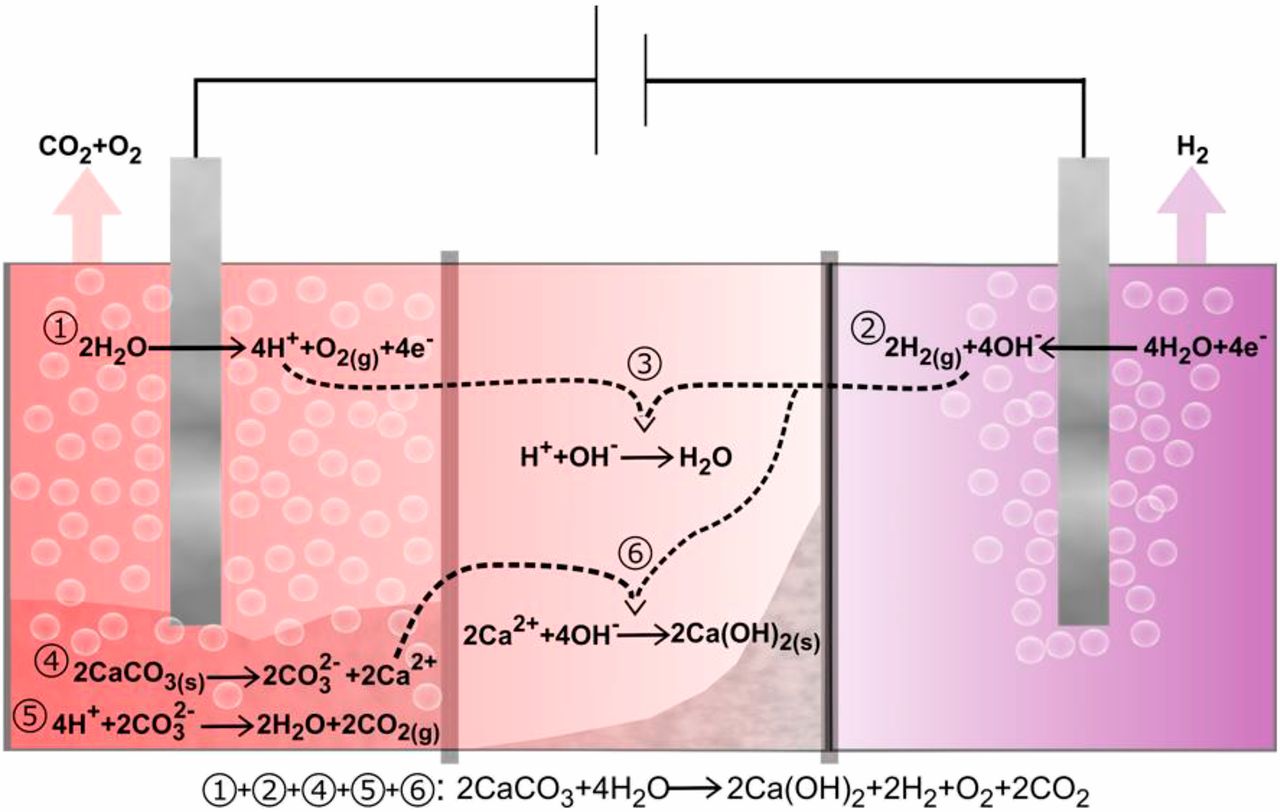 Figure 2 from Ellis et al: Schematic of electrolyzer-based decarbonation cell. Reactions 1 and 2 are oxygen evolution and hydrogen evolution half-cell reactions respectively, under near-neutral pH. Reaction 3 is formation of water from its component ions. Reactions 4 and 5 represent decomposition of calcium carbonate and release of CO2; see the text for intermediate steps. In reaction 6, hydroxide ions in reaction 3 instead go toward formation of calcium hydroxide, and protons protonate carbonate ions (reaction 5). The overall reaction in which CaCO3 is converted to Ca(OH)2 with attendant release of H2, O2, and CO2 is shown at the bottom.

Whether this reactor can be developed into a commercial cement plant remains unclear, but to quote the authors: "These results suggest a pathway to cost-competitive emissionless cement manufacturing wherein all energy is supplied by renewable energy."

I am sure we can look forward to further developments.

The paper points out that calcium hydroxide has many industrial uses to which the process may be applicable other than cement production.

One use that is not mentioned that I think would have potential, in some countries at least, is to use calcium hydroxide from the reactor blended with a pozzolan such as fly ash or a natural pozzolan to make a hydraulic lime. This could be used in mortar or lime concrete and I wonder if this could be a simpler application of the technology to construction compared with the more complex Portland cement. No, it wouldn't make high performance concrete but much can be done with lime mortar and lime concrete - just ask the Romans or the builders of Europe's mediaeval cathedrals.

Sidenote: Pursuing this a little further, porous concrete and mortar carbonates by absorbing carbon dioxide from the atmosphere, so for example, a house built from porous blocks made using hydraulic lime from this process could be CO2-neutral, ie: zero carbon cement, when the lime concrete had recarbonated after maybe 10-20 years, even without carbon capture and storage (CCS). With CCS, the basic house materials would be carbon-negative. The paper suggests that hydrogen from the reactor could be used to generate electricity and this "carbon offset" would make the house even more carbon-negative.

Dense lime concrete used in foundations would take many years to carbonate, possibly centuries. However, it may be possible to develop porous lime concrete for foundations that would carbonate more rapidly, perhaps as interlocking blocks.

Of course, these considerations concerning recarbonation apply equally to mortar and concrete made with Portland cement, offsetting the CO2 released during cement manufacture. Over time, a significant proportion will recarbonate but only rarely do you see any mention of this in the literature. Again, it is dense concrete in large structures and foundations that will not recarbonate on any realistic timescale and, where steel reinforcement is present, recarbonation is obviously undesirable as it promotes corrosion.

In summary, there are many issues that would need to be addressed before the concept of making a "zero carbon cement" by this electrolyzer-based process could become a practical proposition, not least that Portland cement is not just alite. However, the intriguing ideas in this paper could well be a glimpse into the future of cement.

The paper can be found at:

(And there are more good video clips of the decarbonation cell).