The low density is achieved by the formation of air voids to produce a cellular structure. These voids are typically 1mm-5mm across and give the material its characteristic appearance. Blocks typically have strengths ranging from 3-9 Nmm-2 (when tested in accordance with BS EN 771-1:2000). Densities range from about 460 to 750 kg m-3; for comparison, medium density concrete blocks have a typical density range of 1350-1500 kg m-3 and dense concrete blocks a range of 2300-2500 kg m-3. 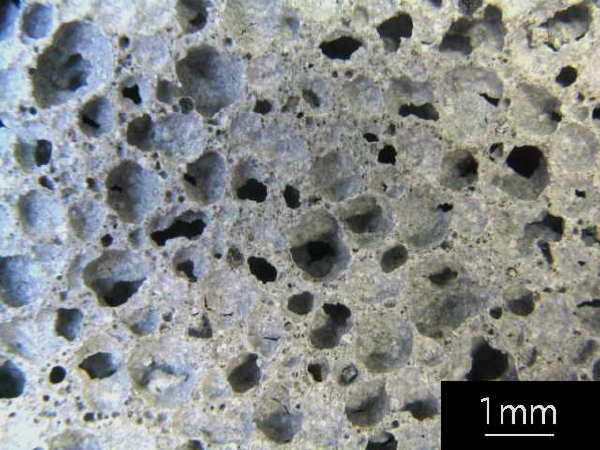 Aircrete also has good acoustic properties and it is durable, with good resistance to sulfate attack and to damage by fire and frost.

Autoclaved aerated concrete is cured in an autoclave - a large pressure vessel. In aircrete production the autoclave is normally a steel tube some 3 metres in diameter and 45 metres long. Steam is fed into the autoclave at high pressure, typically reaching a pressure of 800 kPa and a temperature of 180 °C.

A small amount of anhydrite or gypsum is also often added.

Autoclaved aerated concrete is quite different from dense concrete (ie: “normal concrete”) in both the way it is produced and in the composition of the final product.

In contrast, autoclaved aerated concrete is of much lower density than dense concrete. The chemical reactions forming the hydration products go virtually to completion during autoclaving and so when removed from the autoclave and cooled, the blocks are ready for use.

Autoclaved aerated concrete does not contain any aggregate; all the main mix components are reactive, even milled sand where it is used. The sand, inert when used in dense concrete, behaves as a pozzolan in the autoclave due to the high temperature and pressure.

The autoclaved aerated concrete production process differs slightly between individual production plants but the principles are similar. We will assume a mix that contains cement, lime and sand; these are mixed to form a slurry. Also present in the slurry is fine aluminum powder - this is added to produce the cellular structure. The density of the final block can be varied by changing the amount of aluminum powder in the mix.

The slurry is poured into molds that resemble small railway wagons with drop-down sides. Over a period of several hours, two processes occur simultaneously:

The cement hydrates normally to produce ettringite and calcium silicate hydrates and the mix gradually stiffens to form what is termed a "green cake".

The green cake rises in the mold due to the evolution of hydrogen gas formed from the reaction between the fine aluminum particles and the alkaline liquid. These gas bubbles give the material its cellular structure. 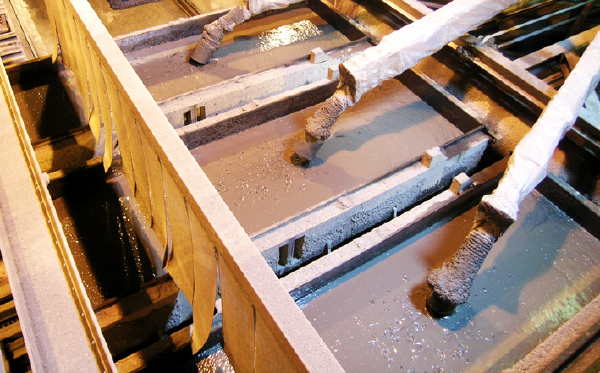 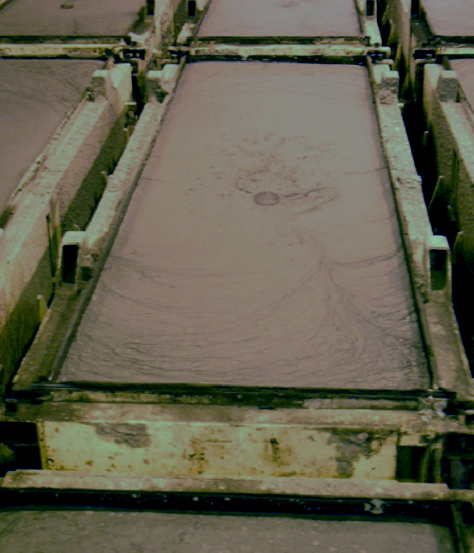 At the risk of incurring the ire of aircrete manufacturers, it could be said that there are  parallels between autoclaved aerated concrete production and bread-making. In bread, the dough contains yeast and is mixed, then left to rise as the yeast converts sugars to carbon dioxide.

Although a much more complex process, Aircrete production conditions are precisely-controlled for, in part, somewhat similar reasons. The mix proportions and the initial mix temperature must be correct and the aluminum powder must be present in the required amount and with the appropriate reactivity an an alkaline environment. All of the materials be be of suitable fineness. A complicating factor is that the temperature of the green cake increases due to the exothermic reactions as the lime and the cement hydrate, so the reactions proceed faster.

When the cake has risen to the required height, the mold moves along a track to where the cake is cut to the required block size. Depending on the actual production process, the cake may be demolded entirely onto a trolley before cutting, or it may be cut in the mold after the sides are removed.

The cake is cut by passing through a series of cutting wires. 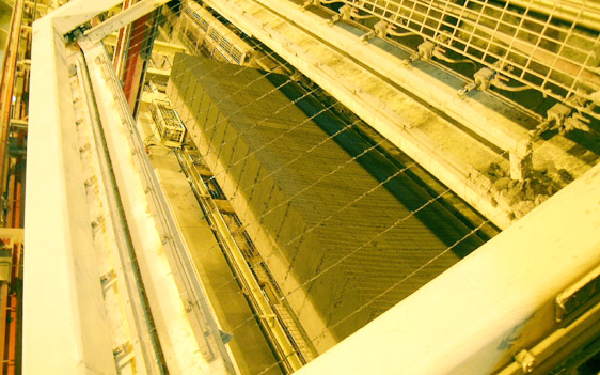 At the cutting stage, the blocks are still green - only a few hours has passed since the mix was poured into the mold and they are soft and easily damaged. However, if they are too soft, the cut blocks may either fall apart or stick together; if they are too hard, the wires will not cut them - here too, the process has to be carefully controlled to achieve the necessary consistency.

The cut blocks are then loaded into the autoclave. It takes a couple of hours for the autoclave to reach maximum temperature and pressure, which is held for perhaps 8-10 hours, or longer for high density/high strength aircrete. 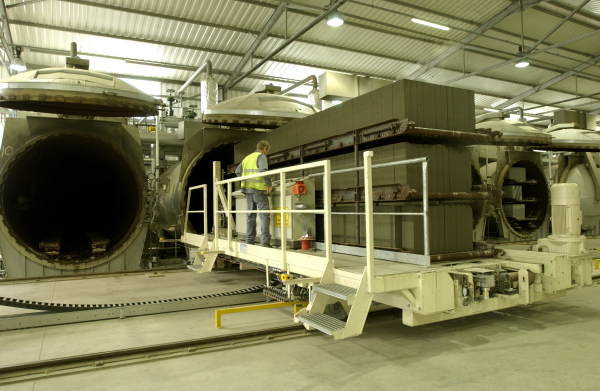 When removed from the autoclave and cooled, the blocks have achieved their full strength and are packed ready for transport.

The essence of aircrete production is that lime from the cement and lime in the mix reacts with silica to form 1.1 nm tobermorite (Figure 7).

During the green stage, the cement is hydrating at normal temperatures and the hydration products are initially similar to those in dense concrete - C-S-H, CH and ettringite and/or monosulfate. After autoclaving, tobermorite is normally the principal final reaction product due to the high temperature and pressure.

Small amounts of other hydrated phases will also be present in the final product. Additionally, hydrated phases form in the autoclave as intermediate products, principally C-S-H(I). This is a more crystalline form of calcium silicate hydrate than occurs in dense concrete; it can have a ratio of calcium to silicon of (0.8<Ca/Si<1.5) but 0.8 to 1.0 is desirable as this ratio facilitates the formation of 1.1 nm tobermorite.

The compositions of the hydration products in aircrete are therefore quite different from those in dense concrete cured at normal temperatures (ie: calcium silicate hydrate (C-S-H), calcium hydroxide (CH), ettringite and monosulfate. See the “hydration” page for more information).

Looking at this in a little more detail from when the green blocks enter the autoclave, the main reactions that occur are broadly as follows:

The final hydration products are then principally:

Unreacted sand is likely to remain in the final product. There may also be some residual calcium hydroxide if insufficient silica has reacted and some residual anhydrite and/or hydroxyl-ellestadite if anhydrite was present in the mix. 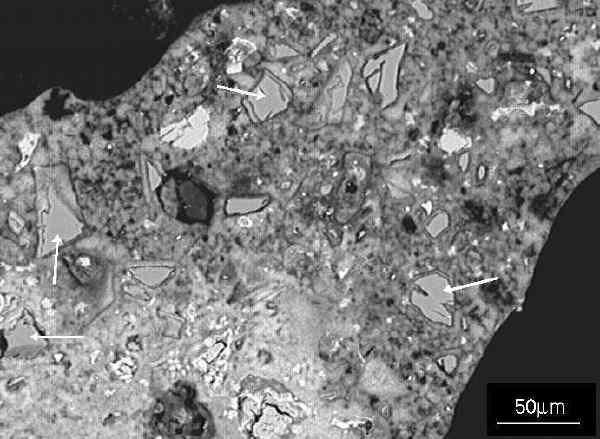 Figure 8 SEM image of polished section showing a detail - a cell wall - of a block made with cement, lime and sand mix.

In Figure 8, some residual unreacted sand particles remain (examples arrowed), often with rims of hydration product showing the size of the original particle. Most of the matrix is composed of tobermorite. Black areas at top left and bottom right are epoxy resin used in preparing the polished section filling air voids (air cells).

The objective is to react sufficient silica from the sand to form tobermorite from the available lime supplied by the lime and cement. This will depend on a range of factors, including the inherent reactivities of the materials, their fineness (especially the sand),  and the temperature and pressure. If the autoclaving time is too short, the tobermorite content will not be maximised and some unreacted calcium hydroxide will remain and block strengths will be then less than optimum. If the autoclaving time is too long, other hydration products may form which may also be detrimental to strength and an unnecessary energy cost will be incurred.

1.4 nm tobermorite (C5S6H9) - forms at room temperature and is found as a natural mineral. It decomposes at 55 °C to 1.1 nm tobermorite and so is not found in AAC.

The use of autoclaved aerated concrete has a range of environmental benefits:

Insulation: most obviously, the insulation properties of aircrete will reduce the heating costs of buildings constructed with autoclaved aerated concrete, with consequent fuel savings over the lifetime of the building.

Materials: lime is one of the principal mix components and requires less energy to produce than Portland cement, which is fired at higher temperatures. Sand requires only milling before use, not heating, and PFA is a by-product from electricity generation. NB: lime may require less energy to manufacture compared with Portland cement but more CO2 is produced per tonne (cement approx. 800-900 kg CO2/tonne compared to lime at 1000 kg CO2 per tonne).

Carbonation: less obviously, the cellular structure of aircrete gives it a very high surface area. Over time, much of the material is likely to carbonate, largely offsetting the carbon dioxide produced in the manufacture of the lime and cement due to the calcining of limestone.

Copyright Notice: material on this website is copyright © 2005-2023 by WHD Microanalysis Consultants Ltd. All rights reserved.